Transactional analysis was created by Eric Berne – a Canadian born psychiatrist – as a way to explain human behaviour. The theory is based on the ideas of Freud but is distinctly different. Berne believed that insight in patient’s personality could be better discovered by analysing patients’ social transactions.

Most important assumptions made by TA are

Related to the question why people think, act and interact as they do, Berne found that the human brain works like a camcorder. It records all our thoughts, feelings and emotions, which we tend to replay in our adult life.

What is a transaction 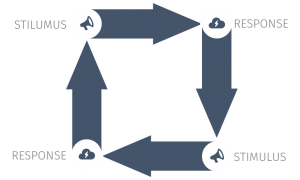 A transaction is the fundamental unit of social intercourse. That means a certain behaviour or better response, follows a stimulus.

If two or more people encounter each other sooner or late one of them will speak, or give some other indication of acknowledging the presence of the others

Another person will than say or do something, which is in some way related to the stimulus.

All before mentioned backgrounds plus the consideration, that a human is born as a biological being, and a being of reason and moral, Berne developed his 3 ego states.

Berne understood that there exist three distinct states in all people. People change from one state to another during their transactions. This change can be easily noticed by the manners, appearances, words, gestures, and tones.

The Child ego state is the response the little person produced to what he/she saw, heard, felt and understood. In other words, this ego state may be considered the collection of “felt-concepts” of life.

The function of the Adult ego state is to update both Parent data and Child data by continuous examination of these data with respect to actual reality. 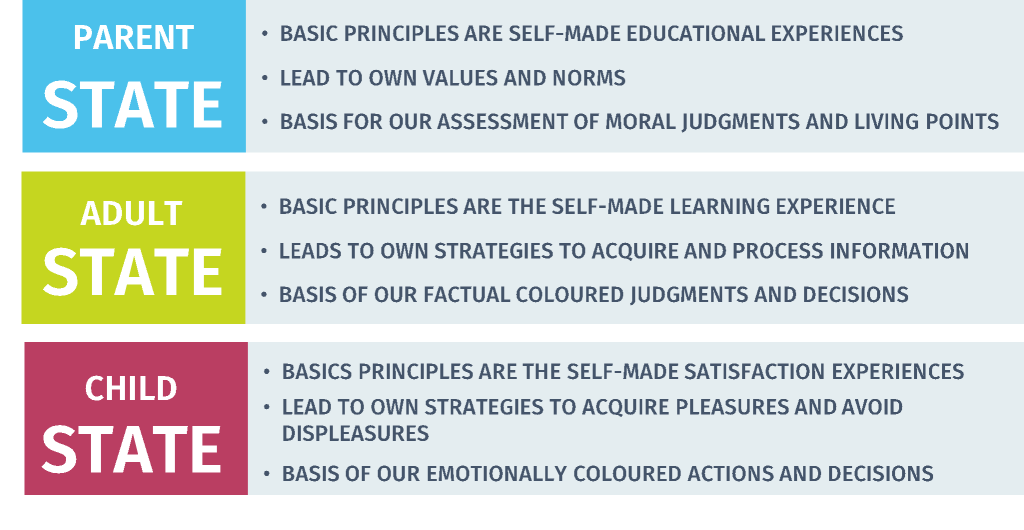 As you probably assume – there are different character, which have different expression of these ego states. The following three examples should help to understand.: 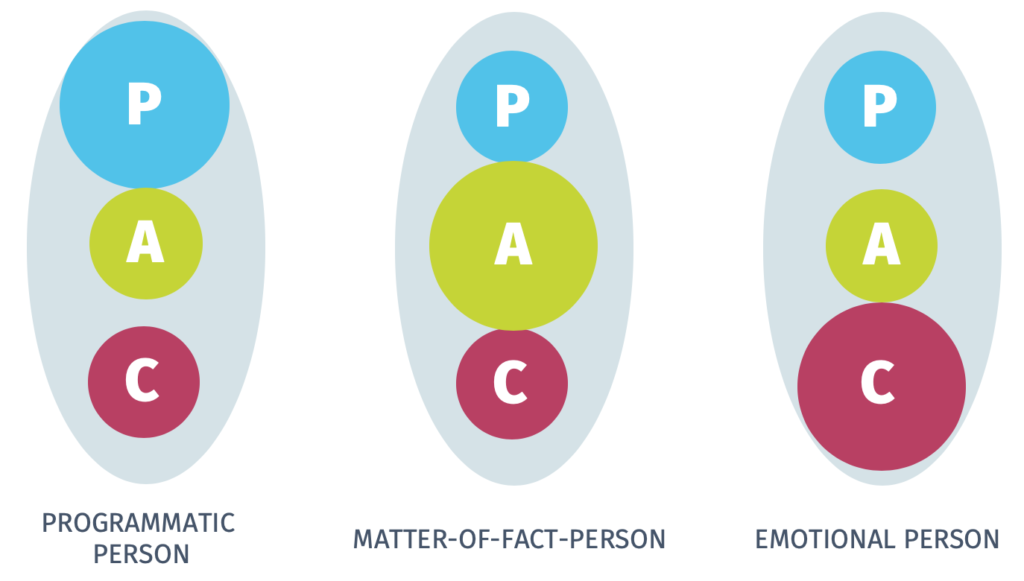 A person with a strong expression of the parental ego state can be characterised as programmatic oriented. He / she is used to give orders to others or could be mostly critical against others.

A person with a strong expression of the child ego state can be called emotionally person. Typically, comedians are rather emotionally than one of the other mentioned characteristics.

Basically, the Parent ego state can have TWO functions. On the one hand, it can be permission giving, nurturing, soft, and loving. In this case, it is referred to as the NURTURING PARENTego state. On the other hand, the parent ego state can be restrictive in a healthy manner. This part of the Parent ego state is termed the CRITICAL PARENT. (In some cases, it is called the Prejudiced Parent.) It covers the prejudged beliefs, thoughts, and feelings that we acquired from our parents. In fact, one part of the ideas people store in their Parent ego states can be beneficial in managing their lives while other Parent ideas are not.  Hence, it is worthwhile to select what information we store in our heads. This way we can keep the information that is helpful in managing our lives and amend the part that is not.

The ADULT ego state is the place where the data is being processed. This part of the ego draws logical conclusions, processes data accurately, thinks, hears, sees, and can generate solutions to problems considering the facts rather than our childlike emotions or pre-judged thoughts.

Two parts make up the Child ego state: The FREE CHILD (which is also named the Natural Child) and the ADAPTED CHILD (which the Rebellious Child is a part of).

The ego state of the Free Child is where our spontaneous feelings and behaviours are located. This ego state experiences the world in an instant and direct way. The Free Child can be emotional, expressive, playful, and authentic. Along with the Adult ego state, it is the place of creativity. Having a dominant Free Child ego state is very important for having intimate relationships. Whenever we adjust in ways that bring us more in closer to our Free Child (i.e. our true selves), we increase the degree of intimacy we can experience in our lives.

To some degree, we all learnt to comply with messages we received when we were growing up. This results in the ego state of the Adapted Child. Adapting is an ability we have all acquired in various ways. There are times when we react to restrictive parental messages, which we rebel against, instead of complying with them. These make up the ego state of the Rebellious Child that represents an alternative to complying. Yet, nonetheless, it is a way of responding to parental messages. Thus, it is a form of adaptation in itself.

Based on the messages received and the decisions made, a young child develops a basic life position. We call these “existential positions” because they influence how we view our own and others existence. There are four basic life positions. These are: 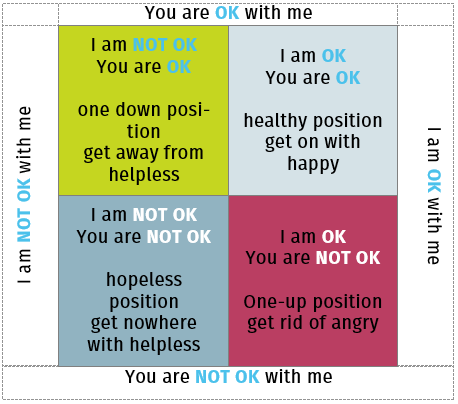 Most humans are born in the position of feeling OK about themselves and OK about others. If things go well they will be able to maintain that position throughout their life. This helps form the basis for a healthy life script. If a person is treated badly or abused, this may result in his or her feeling helpless, powerless, and angry, and he or she may move into a position of believing “I’m OK, You’re Not OK.”

Such an individual may build a life on this angry position and continually prove to himself or herself that others are not OK. This position involves a lack of trust in others and makes it difficult for the person to form and maintain intimate friendships or relationships.

If a person is not well cared for and receives script messages that decrease his or her sense of self-esteem, that person might move into the position of feeling like he or she is not OK while others are OK. This position also leaves the person with difficulty feeling good about himself or herself both in the work arena and in forming trusting and lasting relationships. When things really go wrong during childhood, a person might end up in the existential position of “I’m Not OK, You’re Not OK.” This is the life position of despair. The person in this position has great difficulty seeing the good in anyone and has trouble having any hope for the future.

However, even people in this position can change. They can grow to understand the life experiences that led them to have this view and can learn ways to change those early decisions that support these negatives beliefs. Since we are almost all born in the position of “I’m OK, You’re OK,” we can get back to that belief even if our life experiences have led us to feel differently. It is worth searching to understand how you have been influenced by the events in your own life so that you can come back to a place of knowing that both you and other people are OK.

Examples for the impact of life positions

If people act primarily from the child ego state, they probably often feel attacked from conversational partner. They tend to interpret an evil intent in the purpose of the opponent’s conversation. The cause is often based in the self-belief “I AM NOT OK”. Even positive statements will be interpreted in the mentioned sense. That happens because of the intrinsic tendency, that every statement must be conceived in the sense of the I AM NOT OKlife philosophy. The consequence is a loss of ability to establish real life references.

Last mentioned consequence is similar for persons who act from the complementary life position of critical parent ego state. They tend to communicate only from the position YOU ARE NOT OK. With the attitude of critical reviewing actions and behaviours of the opponent they are trying to override their own “I AM NOT OK” position. It also boils down to a loss of ability to establish real life references.

Behavioural characteristics of the ego states

In the following examples, you will get a picture about several behavioural items of the ego states. Therefor we will refer the functional characteristics A to get in contact and B to fortify oneself to situational settings

Another version to be clear at this point is comparing of characteristics, which might be shown by a person in a particular ego state in the following table: 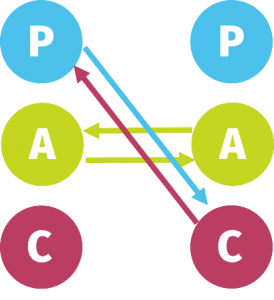 Another important transactional analysis concept is that of transactions. Transactions are about how people interact with each other, specifically, which ego state in person A is talking to which ego state in person B. You may have noticed that sometimes communication continues in a straightforward, easy way that seems to go smoothly. However, at other times, things seem to get all jumbled up, confusing, unclear, and unsatisfying. An understanding of transactions can help you keep your communication with others as clear as you would like it to be. 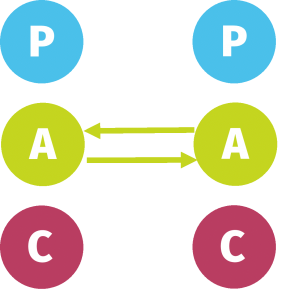 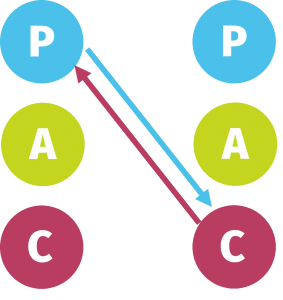 In our first example, the respondent comes from a Critical Parent ego state to cross the transaction, and this communication breaks down. 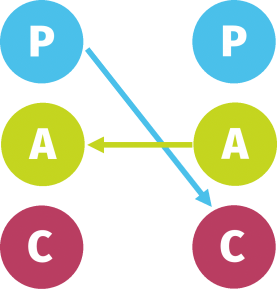 In the second example, the respondent comes from a Parent ego state instead of child, thereby crossing the transaction. 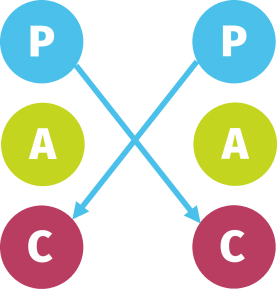 A: “I want you to report immediately right after you placed an order!”
B: “And I want you to pay my salary punctually!”

In the 3rd example, the respondent also comes from child ego state as the sender and not from Nurturing parent ego state as expected. 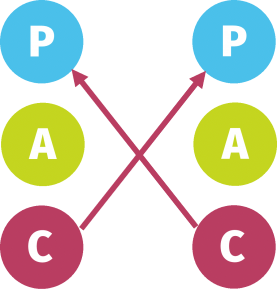 When a transaction is crossed, a break in the communication results and one or both individuals will need to shift ego-states for communication to be re-established.

Ulterior transactions are complex. They involve more than two ego states, and a disguised message is sent. The behavioural outcome of an ulterior transaction is determined at the psychological and not the social level. 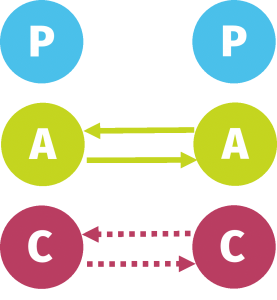 A: “Can I show you the barn?
B: “Oh yes, I am interested in architecture.”

In the example, the sender obviously asks from adult ego state and the respondent answers complementary while the proper meaning of the transaction takes place between the child ego states.

When we learn to recognize and differentiate between straight, crossed and ulterior transactions, we increase our ability to communicate clearly with others. Conversations made up of straight transactions are more emotionally satisfying and productive than conversations that have frequent crossed transactions. Becoming an expert at recognizing ego states and straight, crossed and ulterior transactions takes time. In the beginning, you will need to pay close attention to what is going on both inside yourself and with others. With practice, identifying various ego states and different kinds of transactions becomes second nature.

This work is licensed under a Creative Commons Attribution-ShareAlike 4.0 International License

To get more familiar with it please use the exercise sheet.

The European Commission support for the production of this publication does not constitute an endorsement of the contents which reflects the views only of the authors, and the Commission cannot be held responsible for any use which may be made of the information contained therein.